One of the things I learned from photography is the importance of lighting.  The better the quality of lighting, the sharper the image will be.  To shoot video, you need a constant light, so the flashes I use for photography wouldn’t help.  After some research, I eventually decided on an LED light – an Apurture Amaran HR672W.

There were a couple reasons for this.  The first is that based on the reviews and the type of movie we’re making, I think it will fulfill our needs.  The second is that it’s easy to upgrade with additional lights should we ever want a more extensive system.

While the light probably wouldn’t work in a large studio, for the compact spaces we’ll be shooting it, it produces more than enough light.  Indeed, I had to keep the power set pretty low to get the effect I wanted.

For the camera, I’m sticking with the camera  I use for still photography, an Olympus OM-D E-M1 Mark II.  It can capture 4K video, and has built-in 5 axis image stabilization that works incredibly well. 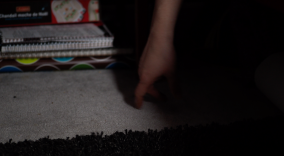 Once we had all the equipment, we ran a few tests in the bedroom that we’ll be using as a set.  It started with getting the lighting right.  This involved adjusting the light’s power setting along with the camera’s exposure compensation until we hit the desired levels.  Next, we tried to re-create the shots from the storyboard.  This is where I ran into the biggest problem.  The camera lens I was planning to use (a 25mm) wasn’t wide enough (or the room was too small) to capture the whole scene.  To get the whole actor in the frame, I would have to leave the room, which would obviously limit the shooting options.

Rather than compromise too much, I decided to spring for a new, wider lens.  I suppose I could have gone through with the old one, but the view was so small that I would have had difficulty depicting all the necessary action in the frame at once.

Another thing I learned is that I should probably use a tripod.  Even though the image stabilization works wonders, I tend to sway back and forth slowly, which makes it hard to frame the shot.